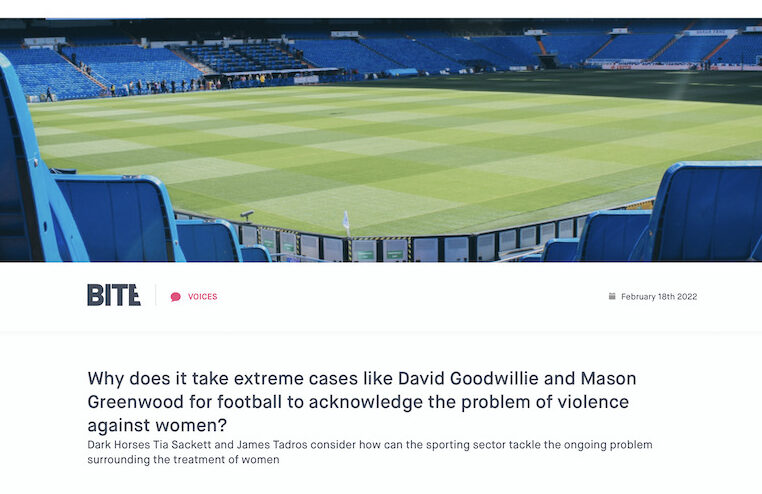 The issue of violence against women peaked again in social consciousness after the murder of Sarah Everard just under a year ago, a case that has been the most poignant in our lifetime so far seeing men actively speaking out on the threats men pose to women.

But like society, football rarely acknowledges the subject outside of extreme cases. The case of David Goodwillie – a man found guilty of rape in a civil case – being signed by Raith Rovers (albeit that decision has now been reversed), and the case of Mason Greenwood who has been arrested on suspicion of rape and assault (amongst other offences), are two prime examples of this that have taken place just over the past two weeks. What does football do in these extreme cases? At best, discard the player like a bad apple. At worst, little changes for the player – apparently Goodwillie remains an employable professional footballer. Either way, limited responsibility is taken by the sport as a whole.

Football should have a huge role to play in campaigning to end violence against women. It is a hugely male dominated sport. Football audiences are largely male, executives in football are predominantly male (especially at elite level), and distribution of wealth in football is heavily funnelled towards men. Working in the industry, we see first hand how elite players and clubs are worshipped to extreme levels.

“The influence that football has within the male population is indisputably massive, and it’s about time they started to use this power to create change”

Within seconds, one post to a brand’s Instagram page about one of their players is flooded with comments from fans celebrating their talent and proclaiming their undying support and respect. The influence that football has within the male population is indisputably massive, and it’s about time they started to use this power to create change. An acknowledgement of the problem in extreme cases is simply not good enough. Women have been fighting to make a substantial change for too long. Ultimately, it now has to involve men – individually and collectively – to stand together with women and actively take a stance. Not all men commit violence against women, but all men are a threat. It’s not enough to sit back and think that you’re not part of the problem, so you must be part of the solution. A partnership between men and women has got to be the beginning. It’s not gender against gender.

The disturbing link between football and violence against women has been clear to see for a while, both at the heart of our sporting institutions and the surrounding fan culture. Only last year during England’s EURO 2020 campaign were we reminded that, in the previous major tournament, domestic violence increased by 28% when the national team played, regardless of the match result. This rose to 38% if England lost. Frightening.

“It’s not enough to sit back and think that you’re not part of the problem, so you must be part of the solution”

And the Goodwillie and Greenwood cases are a stark reminder that the problem isn’t isolated in football fandom alone. It’s systemic in football, from those that take to the pitch each week, all the way up to the reluctance to even acknowledge the issue at board and exec level. Goodwillie and Greenwood are the latest names to make the papers, but are by no means isolated incidents. There are numerous examples of professional athletes having attacked women. Benjamin Mendy and Ryan Giggs are two further names to have hit headlines in the past year alone.

And when these incidents do occur, how are they dealt with by those at the heart of the sport? Raith Rovers provided a snapshot into the process at work when weighing up the decision to sign Goodwillie. In what world does “proven goalscorer” ever trump “known rapist”? Meanwhile, Manchester United continue to react to the Mason Greenwood revelations as the investigation into the player’s behaviour unfolds. Their statement, condemning “violence of any kind” doesn’t even acknowledge Greenwood’s behaviour for what it is. Violence against a woman.

This could be because violence against women is a particularly difficult issue for Manchester United to comment on. Seen through the same lens as the Goodwillie situation, the club’s decision to re-sign Cristiano Ronaldo, despite the player’s own allegation of rape, speaks of a troublingly similar set of priorities.

Disturbing as they are, the recent news reports aid in pushing the subject matter back to the forefront of football’s collective consciousness. It presents an opportunity for someone to step up and take meaningful action, whether it be a club, player or governing body. On the continent, Serie A has already taken steps at acknowledging football’s need to address domestic violence with an annual campaign alongside WeWorld Onlus. A step in the right direction, of course, but a once-a-year tokenistic gesture can’t be expected to extinguish a threat to women that exists throughout the course of a season and beyond.

So what does meaningful change look like? A holistic, dual approach would be advised. If misogyny and gender inequality are at the heart of the problem, then these must be addressed at the heart of our sport’s institutions. What do these environments look like for women, and what does this teach the men that exist within them? As well as clubs looking inwardly to take stock of how their environment is contributing to changing the narrative around women, a zero tolerance policy to supporters on physical and verbal violence against women must also be adopted. Above all, extreme cases like the ones we’ve seen in recent weeks cannot and should not be swept under the rug, rather, they should be the fire that ignites the effort to end violence against women.

Sadly, the news about Greenwood didn’t surprise me. I have been continuously disappointed by sports stars who have turned out to be evil, hateful individuals. It’s got to a point where I’m just waiting for the next one to be exposed.

But as a woman, it ripped my heart out to hear of Raith Rovers and their decision to sign David Goodwillie despite him being found guilty of rape. It’s an absolute slap in the face for sexual assualt survivors everywhere, made worse by the club’s justification of signing him because “he’s a proven goal scorer”. Because being a known goal scorer outweighs him being a known rapist. What message does that send? At best, it’s an extreme demonstration from the top of the club that women are simply not valued, because you wouldn’t sign a man ruled to be a rapist if they were.

The images and audio recording posted by Harriet Robson are chilling. Greenwood’s name in the headlines is almost interchangeable with countless other athletes that have disappointed me in the same way over the past few years, but the first-hand account shared by Harriet reminds you that there’s a victim at the heart of each of these stories. And then you see the Goodwillie article a few days later. What a bloody joke.