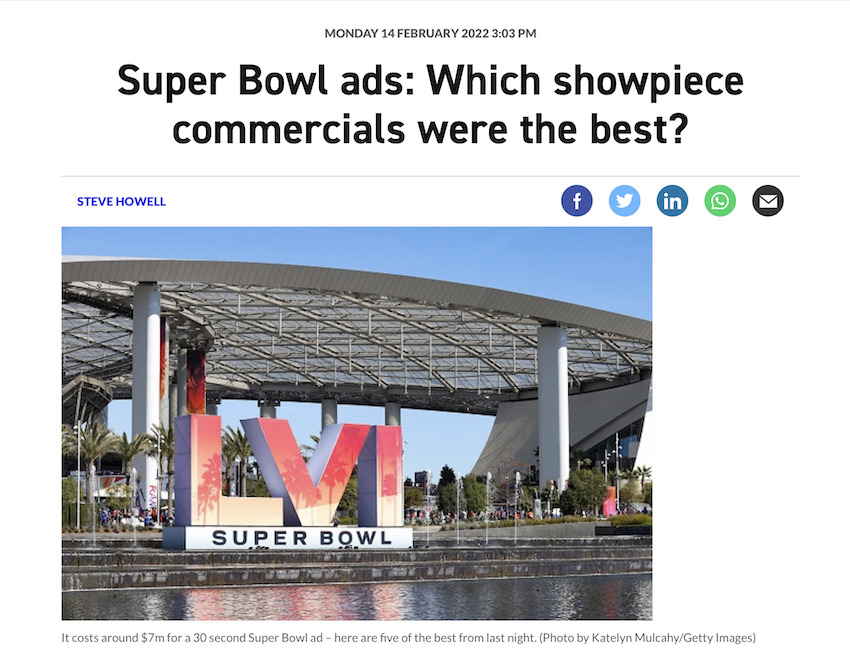 There’s nothing remotely like the Super Bowl in the UK – and the commercials aired during the game are unlike any commercials on the planet.

With an audience of more than 100m watching from home, the Super Bowl ads are a big deal. They cost a lot to make and even more to air – reportedly up to $7m for a 30 second slot this year – so brands put a lot of effort into making them as memorable as possible.

Some will go for a heartfelt tone, others will go for funny and many will feature celebrities to amplify their talkability. There’s an expectation and anticipation that these commercials are going to be well worth watching.

So much so, they’re often ‘leaked’ weeks in advance. They’re talked about on the news. They’re featured on daytime television shows and even voted on afterwards in a major US newspaper to see who really ‘won the Super Bowl’. It really is a really big deal.

So, which Super Bowl ad won this year? Well, you can make your own mind up. It’s subjective, after all. But here are five of the best that are well worth a Google.

For all those Euphoria and Spider Man fans out there, you’ll recognise Zendaya, who stars in Squarespace’s commercial.

She plays a young entrepreneur called Sally who sells sea shells by the sea shore, just like in the tongue twister.

Sally creates a website on Squarespace and, lo and behold, her business becomes a huge success and she retires into the sunset.

The low-calorie beer created the ‘Superior Bowl’ – a bowling alley run by the ever-cool Steve Buscemi – for its Super Bowl ad.

It’s a place where sports stars come to relax and face off with some ten-pin bowling.

Beautifully filmed with ‘Showdown’ by Electric Light Orchestra as its soundtrack, it oozes cool.

And when tennis superstar Serena Williams struts in at the end, it makes you want to whoop like an American football fan who has drunk too many Michelob Ultras.

While some brand push their products, others push their values. BMW have done the latter, enlisting Arnold Schwarzenegger to launch their new electric vehicle.

This time the Terminator is playing the Greek god Zeus, albeit retired to the lush surroundings of California alongside his goddess wife/sister Hera, played by Salma Hayek.

It’s a funny script that doubles down on the electrification element of the car and will probably have Hollywood writers trying to turn the plot into a feature film by the time you’re reading this.

This one features Hollywood elite in Scarlett Johansson, starring alongside her real-life husband, comedian Colin Jost.

The intuitive nature of their Amazon Alexa leads the couple to imagine what life might be like if the smart speaker could actually read their minds.

The outcome is a hilarious series of moments that brings you right into the heart of their marriage.

Johansson and Jost brim with humility and their tit-for-tat battle will have you laughing out loud.

Finally, Pringles have forgone the celebrity route, opting instead for just a brilliantly simple idea, executed with aplomb.

In their Super Bowl ad, we see a young man get his hand stuck in a Pringles tube. But it isn’t going to stop him living his best life. Which he does, right up until his death.

It’s a hefty dose of irreverence, humorously executed, leaving you wishing all ad breaks were full of commercials like this.