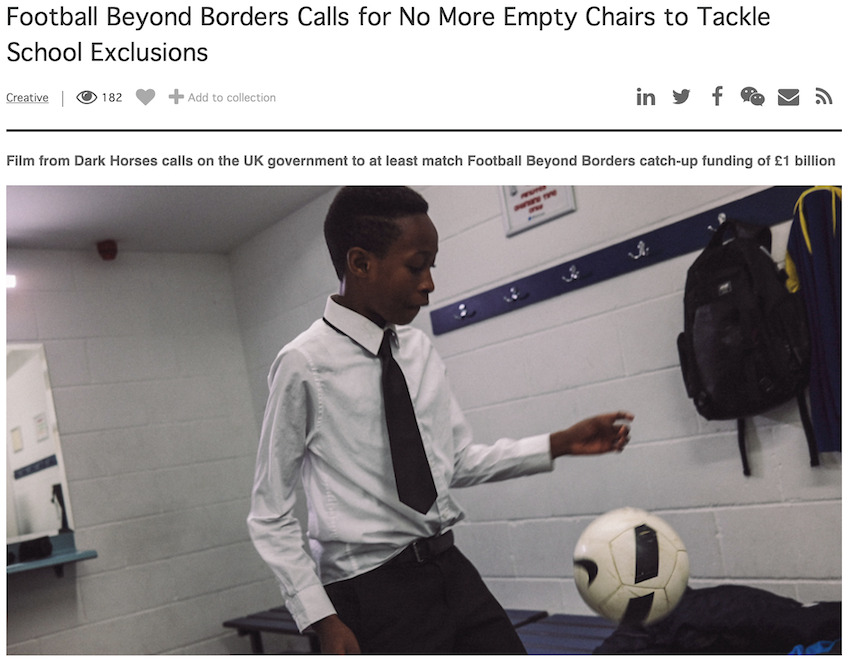 Dark Horses has created an eye-opening and challenging film for the education charity Football Beyond Borders (FBB), telling the story of a vulnerable young student who, whilst dealing with a difficult home life, makes a mistake at school which leads to his exclusion.

Voiced by Daniel, a young person who has experienced school exclusion, No More Empty Chairs, raises awareness of the alarming increase in the number of students facing exclusion from school in England and the hugely detrimental effect it has on a young person’s life, with less than 2% of excluded pupils finishing school with the qualifications they need in GCSE English & Maths.

The campaign supports FBB’s call for the Government to at least match their catch-up funding of £1 billion for next year to extend the Looked After Premium to become a new ‘Vulnerability Premium’. This would cater for children who are known to social services either through a Children in Need Plan or a Child Protection Plan and help keep them in school.

Delivered in his own words and based on real stories, the film portrays a young male student who sees school as being somewhere to belong, an escape from his difficult homelife. As the film progresses we find out that his troubles at home have contributed to his behaviour deteriorating, ultimately leading to his exclusion from school.

Steve Howell, creative partner at Dark Horses, says: ‘No More Empty Chairs’ demonstrates why it is so important that we use the experience of lockdown to do everything we can to minimise exclusions. We wanted to make sure we told a story that not only raised awareness of the issue but also challenged the misconceptions around it.”

Jack Reynolds, co-director at FBB, said: “This year, for the first time, every family experienced the challenge of children not being in school. Now we all know what it means when our children lose their education. But under current arrangements, mainstream schools don’t receive any additional funding to provide support to keep their most vulnerable young people in school.”

Despite the extra work undertaken by many schools during lockdown to support vulnerable learners, there is no additional funding specifically aimed at supporting vulnerable students to thrive in education.

“All too often this leads headteachers to take the difficult decision of excluding these young people. We have to change the funding that schools receive to support their most vulnerable. If not, we will see the learning loss of lockdown replicated by the learning loss of school exclusion.” added Jack.   The impact of exclusion is almost always devastating on a young person’s education, with less than 2% of excluded pupils finishing school with the qualifications they need in GCSE English & Maths. The impact on society is just as alarming, with every cohort of permanently excluded students going on to cost the state an extra £2.1 billion in education, health, benefits and criminal justice costs.

FBB, building on a recommendation from the Education Policy Institute, is calling on the government to at least match their catch-up funding of £1 billion for next year to extend the Looked After Premium to become a new ‘Vulnerability Premium’. This would cater for children who are known to social services either through a Children in Need Plan or a Child Protection Plan.   FBB supports young people who are passionate about football but disengaged at school in order to help them finish school with the skills and grades to make a successful transition into adulthood. It does this by providing long-term, intensive support, built around relationships and young people’s passions, in the classroom and beyond.

In it’s latest impact report, the FBB has found that 98% of students who are involved in its programmes go on to finish school, with 78% of its young people completing the year with level four GCSE in English and Maths.

As part of the No More Empty Chairs campaign, FBB will be hosting an online roundtable discussion on Thursday 25th February from 4-5.30pm with a range of speakers from across the education sector, to discuss how we can ensure that no young person becomes an empty chair. Further information can be found here.