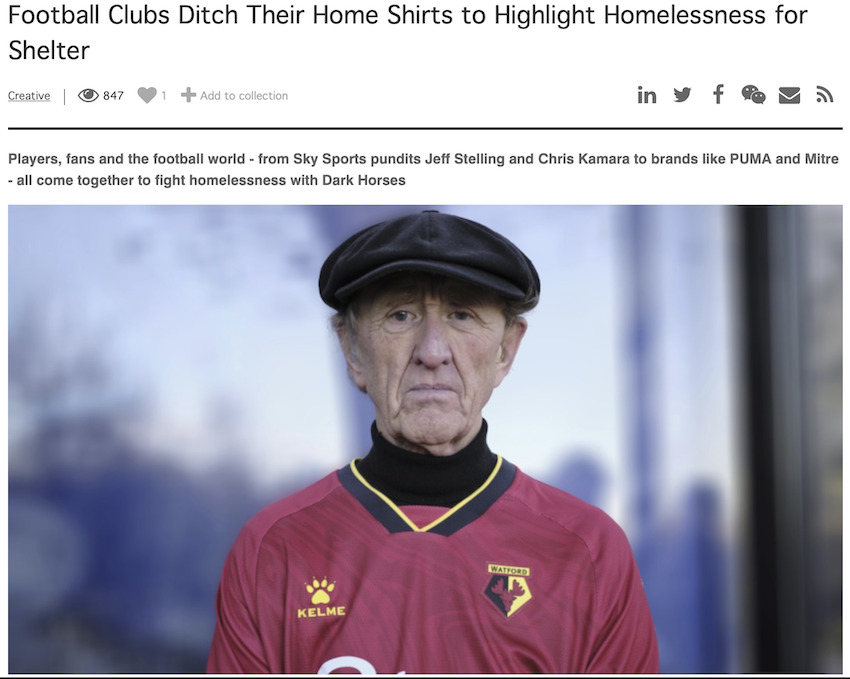 In a footballing first, almost 100 clubs from across the English and Welsh leagues – including Portsmouth, Salford City, Sheffield United and Cardiff – have signed up to ditch their home shirts on Boxing Day for Shelter’s #NoHomeKit campaign created with Dark Horses.

In the space of every 90 minutes, 25 households become homeless in England. That means between the first and last whistle of any football match, 25 households will no longer have a safe or secure place to call home. These could be families with young children, a couple whose lives have been thrown upside down by a cancer diagnosis, or a young person kicked out to sleep on the freezing streets.

With so many people in need of Shelter’s frontline services, the homeless charity is calling on as many football clubs and fans as possible to get involved and swap their home shirts for their away or third kits this Boxing Day, to show their support for everyone without a home today.

Supporting the campaign is a film, also created by Dark Horses, made up of short, funny, heart-warming, football stories based on the classic traditions of Boxing Day football. From a Brighton fan repainting his shed from the club’s famous Blue and White stripes to its green away colours to a girl colouring on a newspaper changing Harry Kane’s white Spurs kit to its cosmic coloured away kit.

Football legend Chris Kamara also reprises his famous “I don’t know Jeff” gaff, all of which lead to the call to action of asking fans of every club to get involved by swapping their home colours for an away or third kit this Boxing Day and donating to the cause.

The film will be shared by some of the biggest names in the game too, including the clubs ready to ditch their home kits. Shelter hopes this incredible reach will encourage even more people to support its frontline workers who are inundated with pleas for help from people who are homeless or about to be. Now that Covid protections such as the ‘Everyone In’ scheme and the eviction ban have gone, and living costs are shooting up, Shelter’s emergency helpline has been receiving 1,000 calls a day.

Melissa Robertson, CEO at Dark Horses said: “There is a beautiful simplicity in this idea about the mutual importance of ‘home’ for both football and Shelter. It’s  been an incredible initiative to be involved in, and we’ve been overwhelmed by the generosity and support we’ve had from clubs, brands and influencers alike. To see clubs like Preston and Portsmouth being cheered on at home whilst wearing away colours? It’s just never happened before in the history of football, and is properly momentous. We hope the film does justice to this historic occasion. This is a cause that could affect anybody, so it’s on all of us, whoever we support, to help fight it.”

Chris Kamara, pundit and former professional footballer, said: ”I got involved in this campaign after hearing some of the harrowing statistics concerning homelessness in this country – such as there being over 400 households made homeless every day. Something needs to change and I’m hoping this campaign can be the start of that.”

Dale Vince, chairman of Forest Green Rovers, said: “I’ve been homeless, I know what it’s like and so when Shelter asked if we’d support this brilliant campaign – you knew that we would. Britain is one of the richest nations in the world, but tens of thousands of our people have nowhere to live – that’s wrong.  Changing the shirts we play in for one game is nothing, shame on the Premier League for preventing the top clubs from joining in.”

The charity is overwhelmed by the level of support it has received from the football community. Even though the Premier League blocked its clubs from taking part on the pitch, Tottenham Hotspur, Everton, Brighton and Hove Albion, Brentford and Watford have decided to throw their weight behind the campaign off the pitch. The teams, who have all been vocal supporters of Shelter’s #NoHomeKit, will be helping the charity through fundraising, matchday advertising and social media content.

Osama Bhutta, director of campaigns at Shelter, said: “We’ve been overwhelmed by the support from across the football community for our #NoHomeKit campaign, and we want to say a massive thank you to everyone who gets stuck in to fight homelessness with us this Christmas.

“In the space of a single 90-minute football match, 25 households will become homeless – many of them will be families with children. That’s why the work of our frontline advisers is so critical. Our emergency helpline is open 365 days a year, including on Christmas Day, so that no-one has to face homelessness alone. By ditching their home colours this Boxing Day, fans and players alike will be helping us to find safe and secure homes for people whose lives are on the line.”

As well as wearing their away shirts on Boxing Day, fans can directly support Shelter’s frontline services donating £5 to the campaign by texting ’HOME’ to 70455, or by visiting here. (Texts cost your standard network rate + £5, and Shelter receives 100% of your donation).