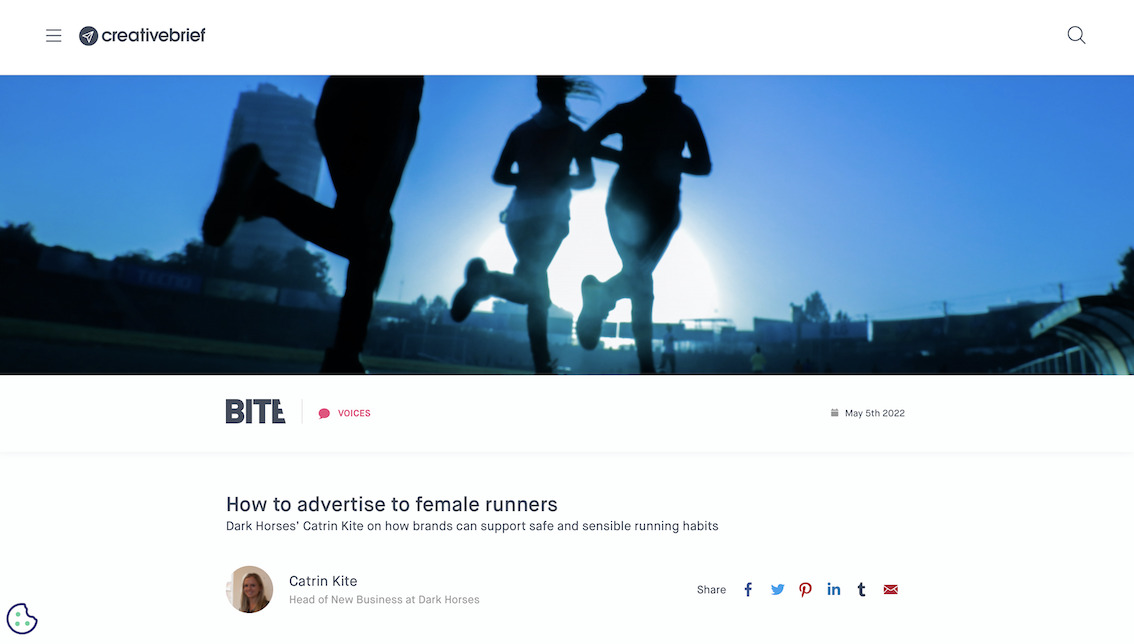 I was running early one morning recently when I heard footsteps coming up behind me. I slowed slightly to let them pass, but then so did they. When I sped up, so did they. I was relatively far from home, on a road with just the occasional car passing. Instinctively I started analysing my surroundings, is there a tube to get on, a side road to nip up, someone around?  Should I slow down, speed up, stop completely? Should I call my husband, or would taking out my phone make me more of a target?

Unfortunately, this isn’t just the story of one run. I frequently run six times a week and on each one, I’m judging what could be a potential threat, who’s friend and who’s foe, whether I have an escape route. This may sound dramatic, but unfortunately, this constant ‘what if’ is only too common amongst female runners, and unfortunately not without reason. A survey by Runner’s World and Women’s Health found that 60% of respondents had experienced harassment while out running. Something that’s sadly been emphasised repeatedly with the tragedies of Ashling Murphy, Sarah Everard and Sabina Nessa.

“I frequently run six times a week and on each one, I’m judging what could be a potential threat, who’s friend and who’s foe, whether I have an escape route”

A simple question was posed on TikTok recently: What would you do if there were no men on earth for 24 hours? One of the most popular responses resonated hugely with me: ‘‘Run around at night blasting music into my headphones without feeling like I need to take one out.” I love the idea of running at night, the lights, the empty streets, the extra time you have when your run’s not squeezed between an alarm and the nursery run. It’s a totally different world devoid of the urgency and bustle of the day time. But unfortunately, it’s this emotionally beneficial solitude and isolation that prevents so many of us from actually doing it.

The reality is that safety is such a big part of running that it filters into every aspect. You plan your runs meticulously – not only working out distance, pace and nutrition, but choosing your route based on which roads you feel safe on, roping in friends to go with you, and checking the exact sunrise time so you’ll be running in daylight. In the same survey, 34% of women said they would only run in the light – something that’s almost impossible to maintain in winter.

I’ve looked back on runs where my fastest miles appeared random, but actually correlated to a stranger I’ve sped up to pass, or a particular deserted street I wanted to get out of as fast as possible.

While the issue is much bigger than any one company or individual, and the onus shouldn’t have to be on those running to ensure their safety, there are things we advertisers can do as an industry to make a genuine difference:

Show what is best practice. You wouldn’t feature a cyclist without a helmet, the same thinking should be applied for running.

Make sure your consumers are aware of any available safety features of your products. I’m guilty of not knowing half of my running watch’s capabilities but discovering features like the live alert (which sends my live location to a pre-set contact at the touch of a button), made me not only feel safer but could one day prove essential.

Continue to develop products and initiatives that have a genuine impact. Campaigns like Volvo’s Life Paint have shown how brands and agencies’ thinking can make a significant difference to day to day lives.

Keep up the conversation on women’s safety. When the Samsung ad first launched, Sahra-Isha Muhammad-Jones, the founder of ASRA running club, reflected this by saying  ‘the advert felt like a missed opportunity to spark a meaningful discussion on women’s safety’. Looking back over the last few days it inadvertently now seems to have done just that, but it’s important it remains part of the conversation.

If we keep talking about it and acting on it, hopefully, one day footsteps behind me won’t be a reminder of the threat of being out alone, but the sound of someone else enjoying the beneficial solitude of running.