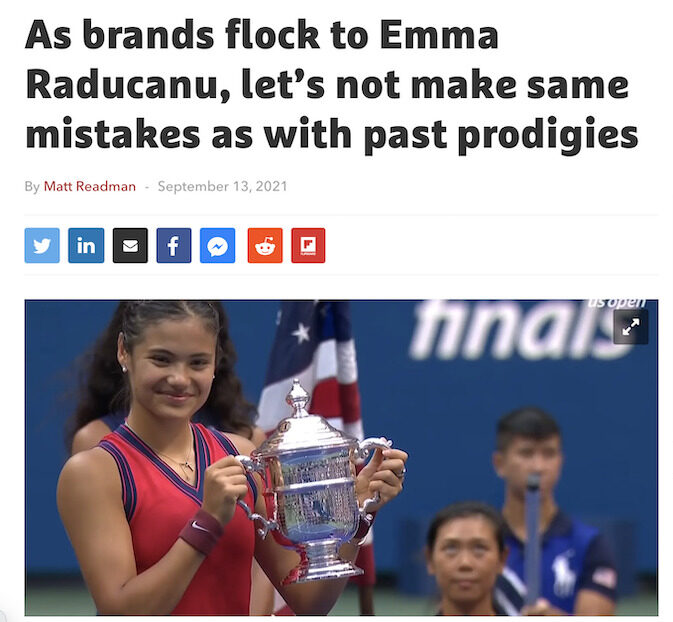 Over the last three weeks we have witnessed the most extraordinary sporting achievement. The speed at which it has happened has taken even the most experienced pundit by surprise. As Emma Raducanu dispatched seasoned veterans on the court, off it the wider world played catch-up to discover more about this new superstar. In the space of a few days, she went from being a middle page sport story to national darling.

Her dramatic success has also caught the marketing world off guard. In the build-up to the final, we saw a flurry of articles in both industry and mainstream press on the earning power of her newfound superstardom. These are full of experts using words like ‘bankable’ and speculating about the long list of commercial suitors racing to sign the 18-year-old.

Talk of multi-million-dollar contracts in sport – particularly women’s sport – is not a bad thing in itself, but it would be prudent to exercise some caution. This is not the first time we’ve seen this story and brands have not always been blameless in where it goes next.

Sometimes it feels as if we are guilty of creating a predetermined story, and then wait for the stars to come along who fit with it. The archetype of the young female superstar is one such example. Both fearless and innocent, charming and graceful, it has appeared across music (Britney Spears), film (Natalie Portman) and sport (Olga Korbut), but it’s particularly prevalent in tennis.

Tennis is rightly praised as a sport where female athletes can compete for equal prize money on court and can surpass men’s endorsement earnings off it. One of the reasons why that’s possible is that lawn tennis has always been socially acceptable for women to play. It has historically been seen as gentile and elegant – for example, the reason why tennis players traditionally wear white is because it helped reduce the unseemly sight of sweating.

The hangover from this means that in the modern era tennis, and the marketing around it, have been guilty of the sexualization of numerous teenage female stars, including the ‘Swiss Miss’ Martina Hingis, Maria Sharapova, Daniella Hantuchova, Ana Ivanovic and, most overtly of all, Anna Kournikova.

With some commentators already talking about how Raducanu has ‘the full package’, there is a real danger that she automatically becomes the natural heir to these women and is marketed in a similar way.

It’s not just the way Raducanu is portrayed, however, that marketers need to consider, but the mental stress they put her under. Professional tennis is brutally tough. A largely individual sport with a scoring system designed to stretch your mind as much as your body. It is a lonely existence, traveling all year round, socializing mainly with those you are competing against, reliant on relationships from older mentors and emotional guardians. Fortunately, Raducanu seems to have an excellent team around her, but Jelena Dokic – another teenage sensation who made her breakthrough as a qualifier – is a warning of the mental abuse that can be inflicted in these environments.

While the teenage superstar is celebrated when they win, the eyes of the world are always looking for any moment of weakness. 20 years ago a hostile French Open crowd reduced 19-year old Martina Hingis to tears. This year, Naomi Osaka has bravely revealed the mental strain of living up to public expectations. Raducanu herself has already had a forewarning of this in her short career after her fourth-round withdrawal at Wimbledon was described by one publication as the situation getting “the best of her”.

Her coach described her mental fortitude as “truly special”, but there will undoubtedly be greater mental trials ahead. Multi-million-dollar endorsement deals and win bonuses just add to this pressure, so brands have a responsibility to put Raducanu’s mental wellbeing at the top of their priorities.

The story of the teenage superstar is often seen – and even described – as a fairytale, but there are clearly demons here too. If not managed correctly, marketers can fall into the traps of inadvertently objectifying young stars or adding significant burdens to their mental health. Worse still, we have seen that a star is often vilified when she tries to push back against this archetype. In the entertainment world, the examples of Jennifer Lawrence, Lindsay Lohan, Caroline Flack and Drew Barrymore should stand as a warning.

Luckily for Raducanu she is competing in a period when athletes are finding their true voice. For too long the persona of superstars was built outside of their control – by the media, brands and public. Now, athletes are starting to regain the ability to forge their own narrative. Through platforms like TikTok they can show another side to themselves, a truer side away from the sponsored social posts and the media trained interviews.

Raducanu offers an incredible opportunity for brands. Not to use a marketable face, but to listen and understand the story she wants to tell. The Emma Raducanu story can’t reflect those stars that have preceded her, it deserves to be totally unique and something we’ve never seen before. Brands that are looking to sponsor her should be patient, helping her discover who she is and what she wants to stand for. If they do, they will reap far greater rewards than any opportunistic short-term activations.