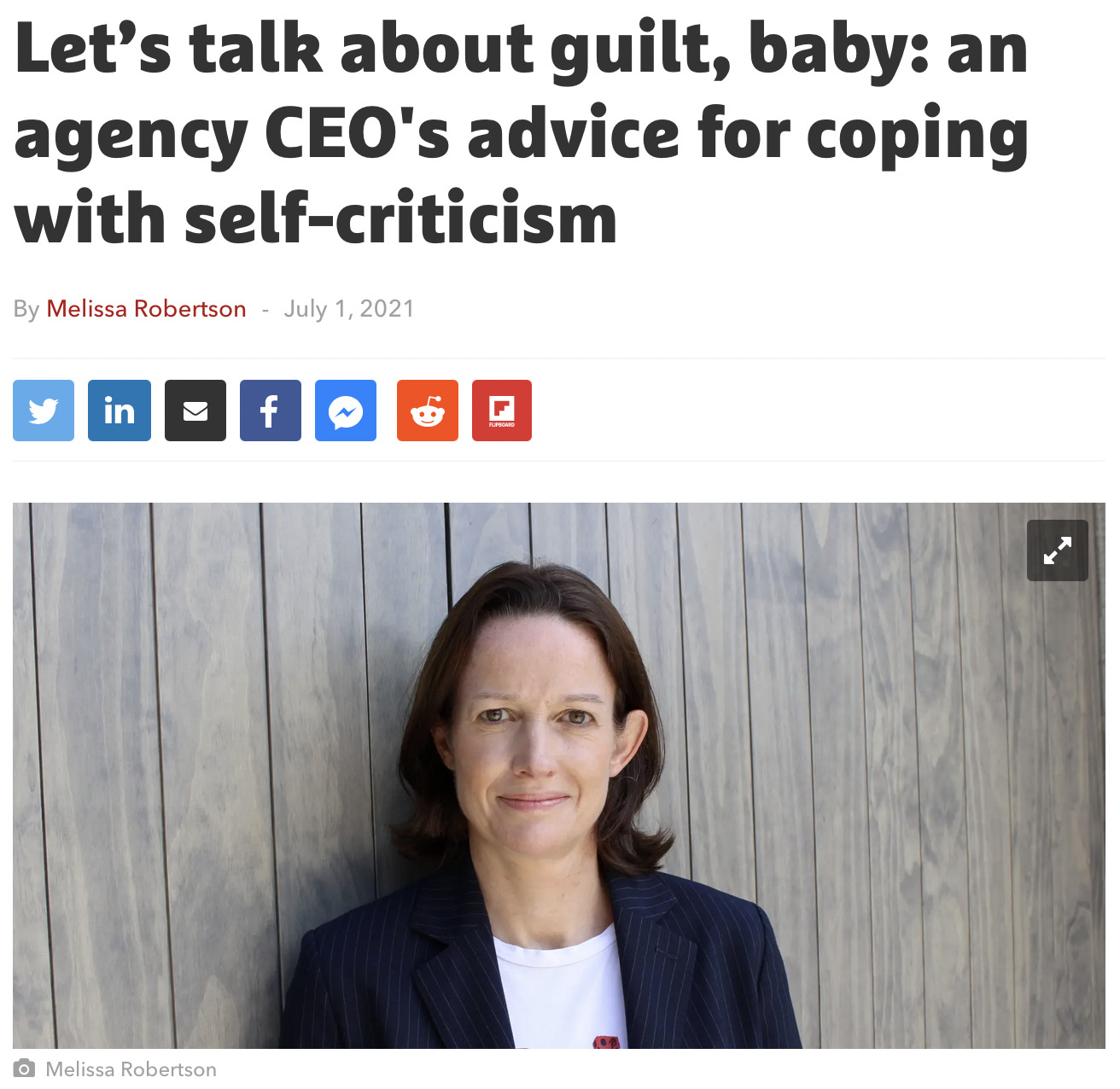 From how she’s supporting her team to how much she’s switching off at home, Melissa Robertson is one of a growing number of us feeling a sense of guilt about how we’re managing our work lives. Here, the Dark Horses chief exec writes candidly about her experience and shares her advice for coping with unjust self-criticism.

Maybe it’s exacerbated by Covid, maybe it’s worse for women, maybe it’s worse for menopausal women, but boy do I feel guilty THE. WHOLE. TIME. About something, about everything, about anything. In fact, studies have suggested that women are more predisposed to guilt than men. And menopausal women, as decreasing oestrogen levels play havoc with neurotransmitters, are even more likely to experience stronger feelings of guilt.

So, what does that mean for me when I’m trying to run an agency, and present a vision of calm, collected focus and control?

No one wants someone feeling out-of-control-underneath taking responsibility for their career development and the agency’s success, do they? Yet, I know that I’m not the only one. In fact, I fear that guilt has become something of an epidemic, with as many as 1 in 5 citing it as a reason for not taking work breaks. And it’s corrosive, making us worse at our jobs, not better.

But what does ‘guilt’ even mean? I’d never really given much thought to the meaning behind the word. Apparently, it’s a feeling people get after doing something ‘wrong’, either intentionally or unintentionally.

Hang on a sec? Am I doing loads of things wrong? I don’t think I am. Or am I? In the more formal definitions, guilt is about an individual taking responsibility for actions taken. Yet, most of my guilt revolves around things I feel I should have, but haven’t, done. Although there are undeniably feelings of guilt around plenty of the things that I do, that I know I shouldn’t do, yet continue to do.

What are these terrible deeds that I’m doing that lead me to punish myself, so? I’m not stealing, being violent or lying (well, not too much of that latter one; I prefer to think of it more as circumnavigating the whole truth for positive outcomes).

I feel guilty that I surreptitiously (or sometimes even blatantly) check and respond to messages whilst on video calls.

I feel guilty when I’m a bit grumpy or short with others.

I feel guilty about tucking into chocolate or wine when I should be resisting.

I feel guilty that I’m writing this article, when I’ve got a billion other things I should be doing.

But do I feel really bad about these dastardly actions? The truth is, not really. I have some minor feelings of remorse, but not enough to stop me acting this way. No, the real guilt, the pervading, gut-wrenching, chest-tightening guilt comes from the things I am not doing.

I feel guilty that I’m not going into the office more to support the team who do go in.

I feel guilty when I sprint to put a wash on in between meetings.

I feel guilty that I don’t catch up enough individually with the team.

I feel guilty when the kids get back from school, and I can’t chat to them because I’m on work calls.

I feel guilty that my husband does the lion’s share (or perhaps ‘dog’s share’) of dog walking when it was me that wanted her in the first place.

I feel guilty that I don’t have time in the week to keep the house clean enough.

I feel guilty that I don’t get hoovering, dusting and mopping at weekends.

I feel guilty that I don’t read to the kids as much as I used to.

I feel guilty that I don’t voraciously consume books in the way that I used to.

I feel guilty when I forget to do stuff that I’ve promised to do.

I feel guilty that I don’t make enough time for my husband.

I feel guilty that I don’t make enough effort with my friends.

I feel guilty that I don’t call my parents as much as I should.

I feel guilty that I’d rather stay in than go out.

I feel guilty that this list could go on for pages.

So what can you do about it? As much of this kind of guilt is psychological, the standard rules for guilt mitigation don’t really help. Owning up, apologising, making amends and so on are only helpful when you have actually done something ‘wrong’. No, this is about taking a demolition ball to self-criticism and self-punishment, which can take a heavy emotional toll.

The first solution is self-compassion and self-care. It might sound terribly navel-gazing, but this is about your own internal agony, so you don’t need to shout it from the rooftops. It might be hard to just ignore it all, but try to be less hard on yourself, and give yourself a break. Remind yourself of the good stuff that you do, how people might value you, and make an effort to boost your own confidence. Little wins and little pats on the back from yourself can go a remarkably long way.