This is a story about control. About who has it in women’s sport. Because as long as that control is systematically taken away from the players, then we are doing wrong by the women’s game and female athletes.

Women have been controlled in sport for too long and in too many different ways, almost exclusively by men – what they should wear, how they look, how they should behave – and all of these things detract from the real discussions that should be taking place about their ability, their talent, their brilliance.

“By sexualising and objectifying female athletes, we are diminishing the credibility of female sport by focusing on the way the athletes look, rather than their achievements”

The first, a MailOnline lead story celebrating the Lionesses reaching the final, with the headline ‘England’s Golden Girl’ and several images of Alessia Russo – in a bikini, posing on an evening out and as a child. In the article itself, it is the fourth and last photo as you scroll through that finally shows Russo as the professional football player she is. Russo, in this instance, was not in control. Her social channels were entirely unnecessarily raided, presenting her as some kind of Love Island contestant. 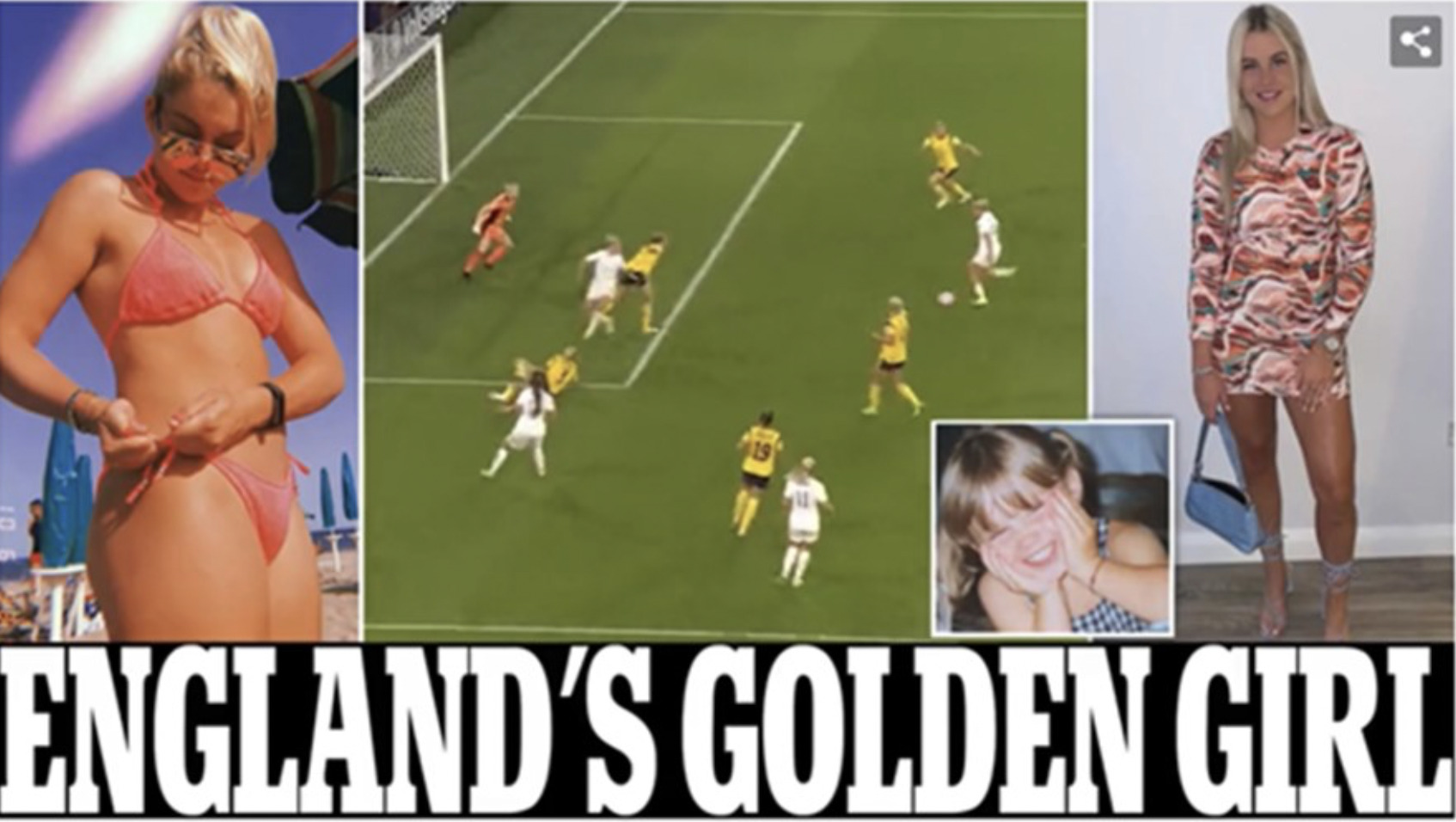 You couldn’t find a more blatant example of entirely unnecessary objectification (and it was in stark contrast to the same publication’s back page a year before lauding the men reaching the same stage, with the headline ‘One game from glory’ and series of images of either the players or jubilant crowds. In other words, it was all about the subject in hand – the football). 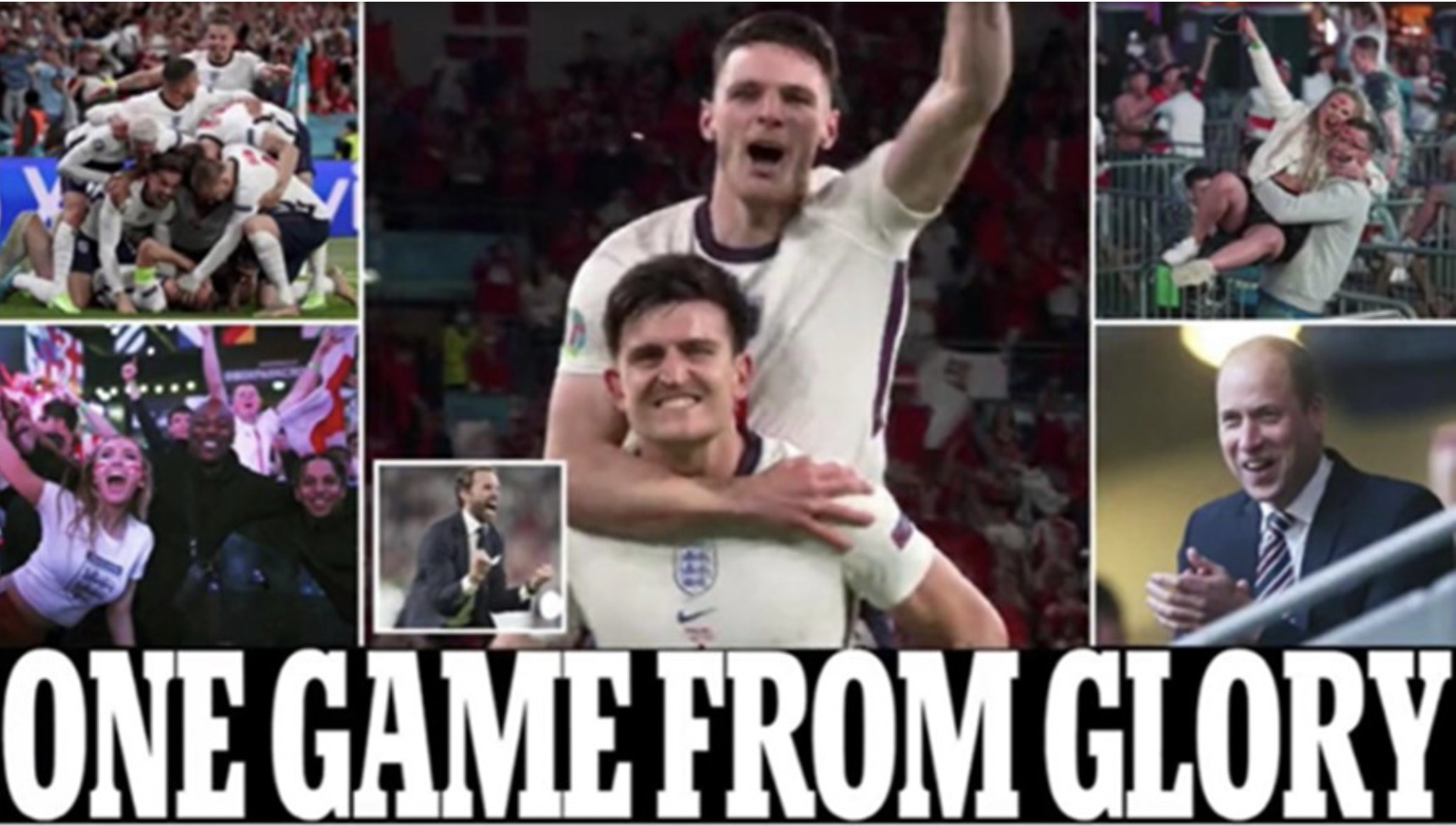 The other photo shows a woman entirely in control of her image, her body, her behaviour. With Chloe Kelly’s glorious yellow-card-receiving, Euros-winning, display of athleticism and empowerment, there was a moment when we just might have hoped that the male-gaze-driven lust and objectification of female athletes had instantly become a thing of the past. You couldn’t hope to witness a more positive affirmation of physical expression – the country celebrated with her, without automatically knee-jerking to derisive or judgemental debate about her body. 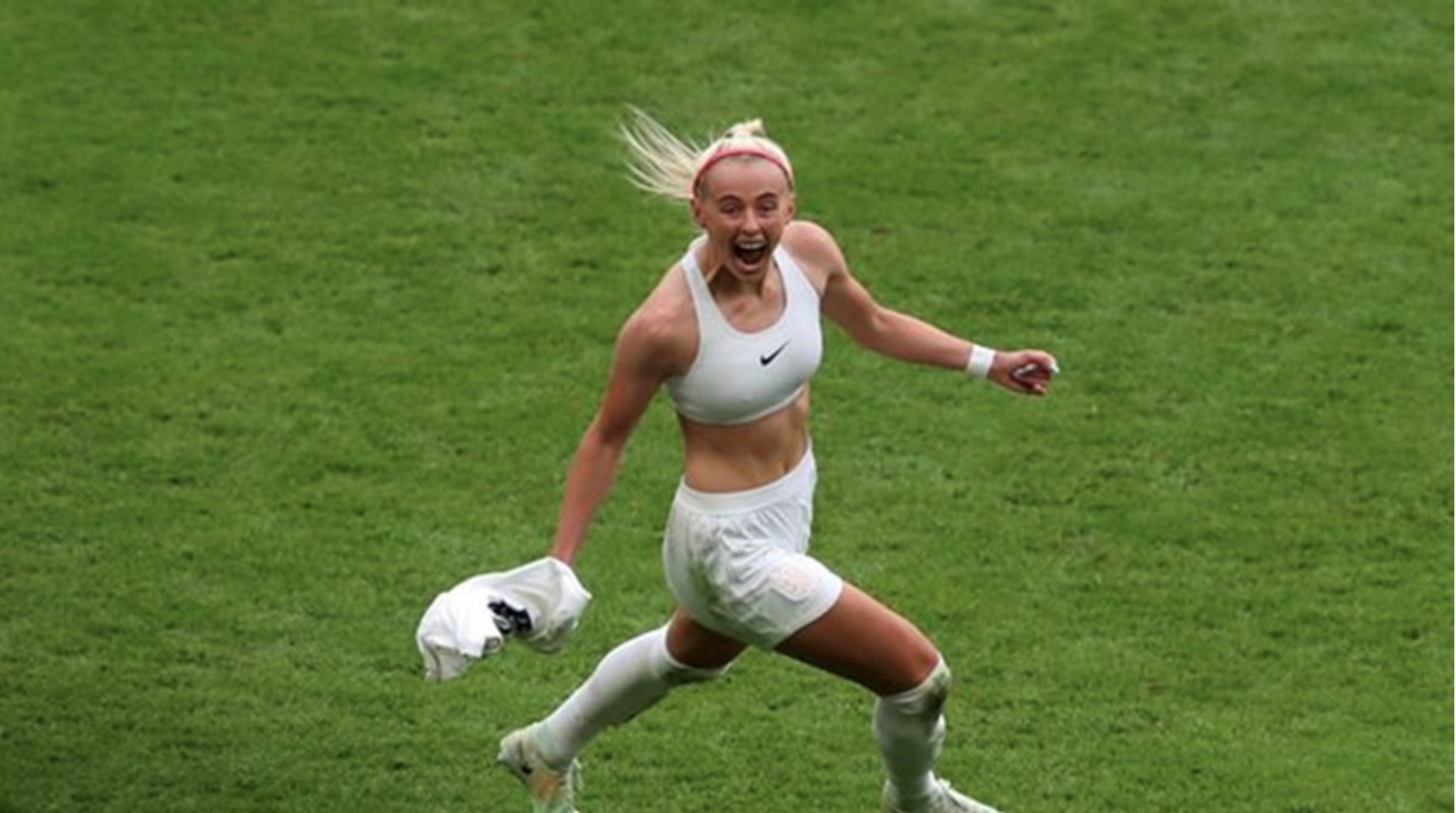 But the fight is most definitely not over. Since the win, perhaps as some kind of reassertion of male dominance, naked and risqué photos of high-achieving sportswomen, including WSL players, Commonwealth Games competitors and a well-known former Lioness have circulated on Whatsapp without their consent.

And sadly, we must concur that there is still a long way to go to put women on the same playing field as men. Because by sexualising and objectifying female athletes, we are diminishing the credibility of female sport by focusing on the way the athletes look, rather than their achievements. There is an exhaustive list of examples of female athletes being treated entirely differently to their male counterparts.

Reassuringly, there are examples of women pushing back, and asserting control where it might have felt there was little opportunity.

After becoming the first woman to win FIFA’s player of the year award, Norwegian player Ada Hegerberg was asked by French DJ and producer Martin Solveig to twerk on stage. She refused to do so, and walked off the stage. Alexandra Popp, Germany’s captain, wore a fake moustache to a press conference to make fun of news articles asserting she was strong enough to play for the men’s team.

And it’s not just football. There are numerous examples across all sports of women being aggressively and relentlessly exposed, policed and judged by the male gaze for everything other than the job in hand. And thankfully, they are fighting back, and it might just work.

Famously last year Norway’s women’s beach handball team was fined by the European Handball Federation for wearing shorts instead of bikini bottoms, despite complaining about the kit since 2006. The Federation required that female athletes wear bikini bottoms “with a close fit and cut on an upward angle toward the top of the leg.” Thankfully the outpouring of support has led to something of a volte face with a new clause stating ‘Female athletes must wear short tight pants with a close fit’ while they can also wear ‘body fit tank tops.’

In April 21, the German women’s gymnastics team ditched the traditional, high-cut leg-baring leotards for ankle-length unitards, protesting the “sexualisation” of their bodies.

But there are still too many situations where female athletes are judged, exposed and humiliated.

Serena Williams, despite all her successes, continuously receives backlash for her appearance in some way or another. In 2018, the French Open, banned Williams’ use of a taut, black catsuit outfit. Williams didn’t wear the outfit to attract attention to anything but her tennis. The bodysuit’s fabric protected her play from being impaired by persistent blood clots she experienced since the birth of her daughter.

During the 2021 Innsbruck Bouldering World Cup semifinal, Austrian athlete Johanna Färber was featured on the livestream as she navigated a bouldering route. The camera zoomed directly in on her bottom and the footage was aired in slow motion. There were a number of alternative camera angles, and no need for slo-mo, yet that option was chosen. The footage was later deemed to be “upsetting and disrespectful” by Färber.

“It’s time for female athletes to embrace the power they have. To write their own narrative. To take back control of their own image and destiny”

In the women’s halfpipe event at the Pyeongchang Olympics in 2018, a 17-year-old American, Chloe Kim made history when she became the youngest woman to win a gold medal in snowboarding. The commentator also went on to say on live television, as she celebrated her victory that “if she was 18, you wouldn’t be ashamed to say that she’s a little hot piece of ass.”

In quite the opposite vein, Paralympian Olivia Breen had officials calling her briefs ‘too short and inappropriate’ despite being specifically designed to compete in, and being the Adidas official 2021 briefs.

And if it’s not sexualising, it’s undermining and insulting based on aesthetic rather than athleticism. Gymnastics has long been criticised for its attitudes over attire, weight and body shape. After defeating teammate Simone Biles in the 2013 American Cup artistic gymnast Katelyn Ohashi dropped out of elite competition after suffering body-shaming abuse including insults like ‘You look like a pig, you look like you swallowed an elephant’. However, after battling her demons and coaches, she came back stronger than ever in the 2019 Collegiate Challenge, scoring a perfect 10 in one of the most glorious displays of talent and pleasure that you could ever hope to watch.

It’s time for female athletes to embrace the power they have. To write their own narrative. To take back control of their own image and destiny. To push back on governing bodies and male teams dictating behaviour and attire. To be given more freedom to make their own choices. Female athletes shouldn’t have to conform to archaic rules or expectations, they should be the ones in charge.

And as marketers and media, we can and must support them. Let’s stop the policing, the sexualisation as a go-to. Let’s stop pre-determining expectations of femininity. Let’s celebrate and champion athleticism, strength, and aggression. Let’s give them the unqualified respect, admiration and awe that they deserve.