Dark Horses thought it had the perfect playbook on how brands should back women’s sport. But after England’s win in the Women’s Euros, strategy director Mark Lloyd explains why the agency is writing a new one. 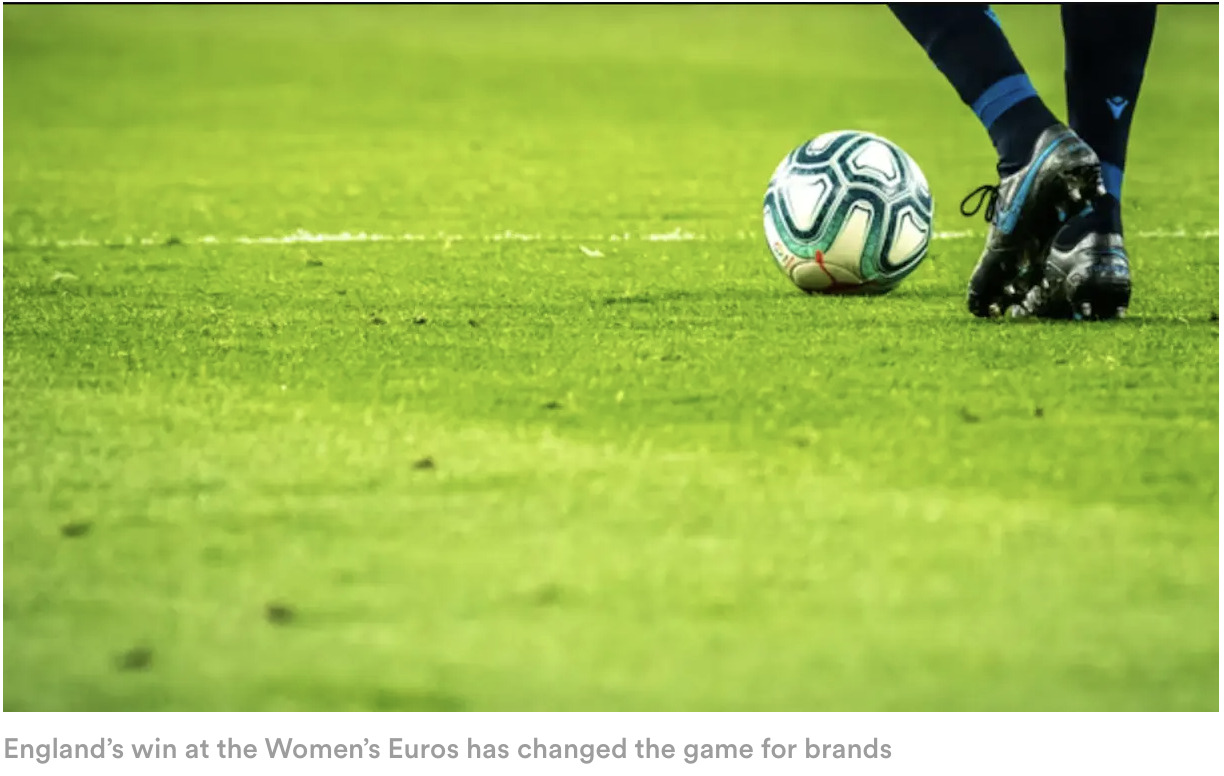 For years, women’s football was the great unknown. Little had been done to understand its appeal or what role a brand might play in this growing space. Media coverage and projections for the future suggested a sports marketing gold rush, but one to which we’d all forgotten to bring our shovels.

So with little else to fall back on, women’s football became a metaphor for social change, and a shorthand for the wider gender empowerment movement.

As a result, many brands stayed away, citing a lack of ‘credibility’ and harboring (worryingly genuine) concerns about promoting a gender empowerment message without having their own houses in order. Those brands that did get involved saw women’s football as a novel path to brand purpose. Campaigns were shunted to the D&I departments and budgets paled in comparison to those made available for other marketing ventures.

But in those chaotic few seconds between Chloe Kelly’s extra-time winner hitting the back of the net and a near-full pint of room-temperature lager soaking my entire back, everything changed. No longer was women’s football this great unknown. Its appeal as a spectacle was obvious. We all just felt it.

As the celebrations continue to play out, what seemed to be the automatic entry point for brands six weeks ago suddenly seems completely out of step with the mood around the sport. After Sunday, using women’s football as a vehicle solely to push a charitable agenda feels like paying Harry Styles to write your company’s hold music. Sure, it works well enough, but it also takes the emotion out of the experience and wholly misses the point.

Here at Dark Horses, this has left us scratching our heads. Before the tournament, we published the 7 Deadly Sins of Marketing Women’s Sport, written after a couple of years of working alongside the team at the FA on the Lionesses and Women’s Super League, as well as two of the main Euro 2022 sponsors, Just Eat and TikTok. At the time, we were excited to share what we’d learned with the industry. But what seemed relatively insightful a month ago now feels pedestrian, obvious even, thanks to what this England team has achieved.

We talked about the sin of ‘unity,’ the temptation to treat all female athletes as one homogenous group of monochrome togetherness, being a common pitfall for brands. They might be united in their aims (and hangovers), but these sportswomen, each with their own story and personality, have obviously become individual heroes in their own right.

The sin of ‘penury,’ to present the women’s game as more accessible and more amateur than its male counterparts, is another avenue we asked marketers to avoid. But Alessia Russo backheeling physics in the face in front of a bumper crowd on the biggest stage possible makes that argument a bit redundant. Of course this team isn’t just a “down-to-earth bunch of girls” – they’re a formidable unit of world-class athletes.

We recommended that brands avoid the sin of ‘lust,’ celebrating athleticism over aesthetics. But Chloe Kelly’s celebration put paid to that, eloquently described by @lucymirandaward: 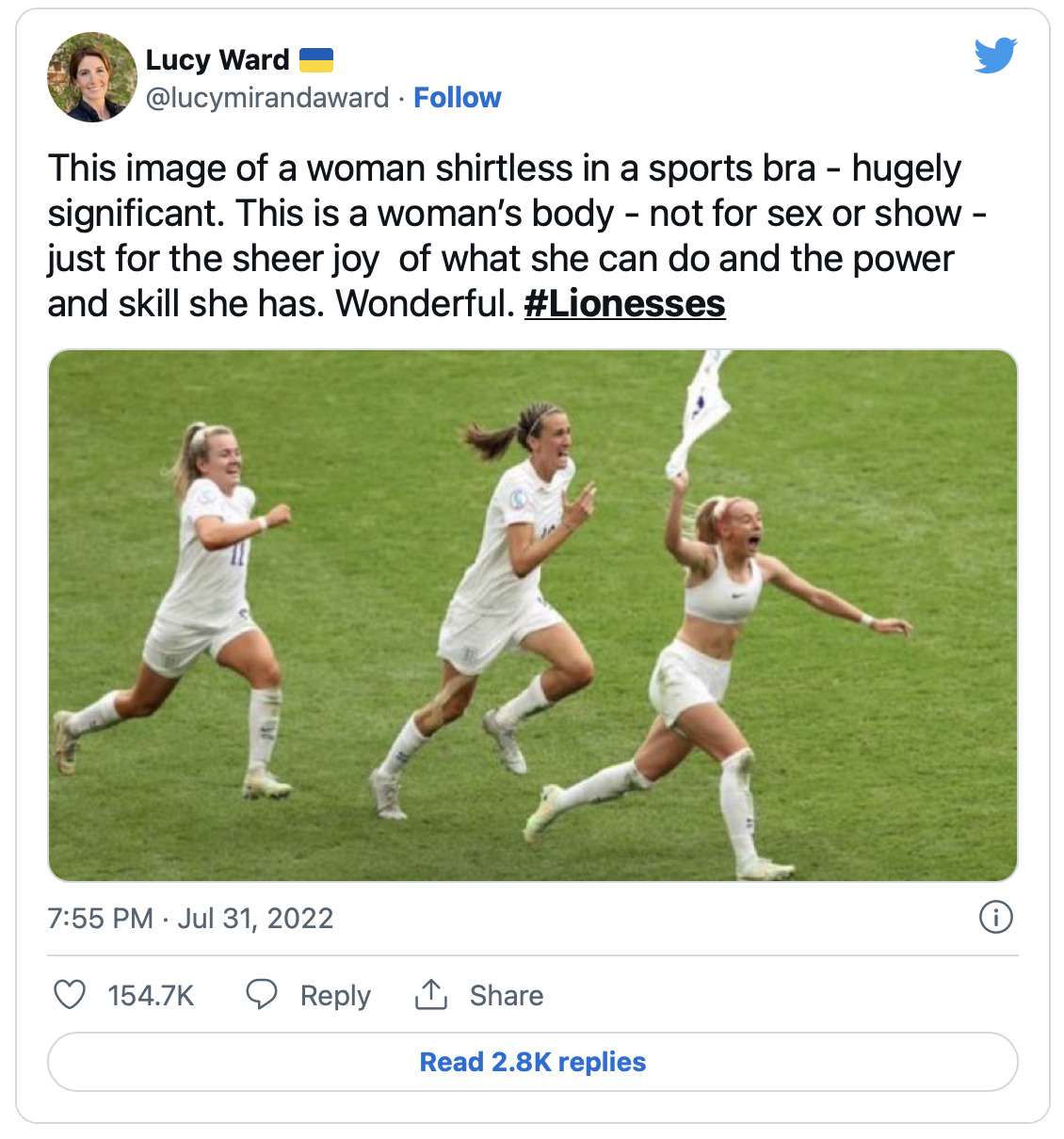 And as for ‘chastity’? The very real temptation, especially following the fan antics around the Euro 2020 men’s final, to treat women’s football as wholesome and lacking in edge? Well, we can thank Jill Scott for making that point a rudimentary observation as she gave her German counterpart a lesson in the English language, all caught in beautiful super slow-mo, and thus became a national icon.

Without going through all seven, you can see we’ve got some work to do in forming a new point of view on women’s sport. Thanks Sarina.

But the good news is that brands should now see a way forward in women’s football, breaking away from the sins of the past. This means those already in the game can diversify their output away from brand purpose – the knock-on effect of which should have more brands seeing more entry points into women’s football. That could take the form of individual deals with players, starting with the Lionesses, or a higher willingness to invest year-round in club competitions.

With the new season of the Women’s Super League less than six weeks away, those brands that have tentatively watched from the sidelines for so long should heed the call of Leah Williamson and Ian Wright, and look inward to see what role they could play in the next chapter of the women’s game.