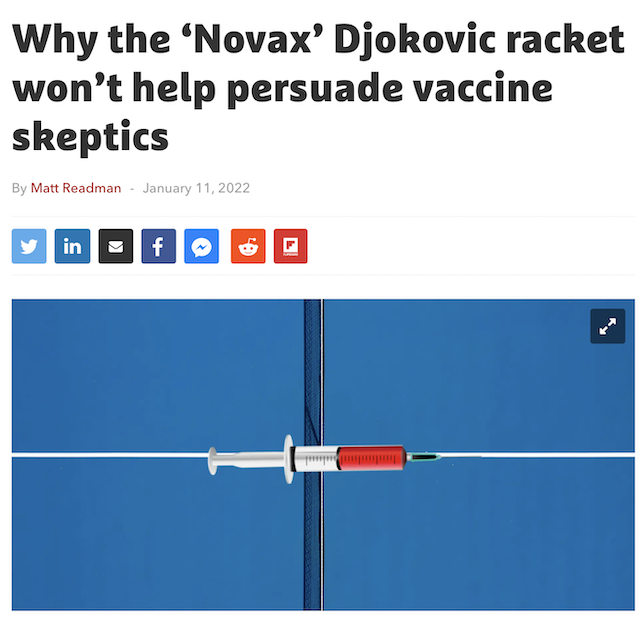 Once again sport has become the stage on which the world’s biggest cultural conversations are played out. In this case, it isn’t racism, gender equality or global politics – it’s the problem of vaccine adoption.

As such, how we treat Novak Djokovic is important. His case is symbolic of a much bigger debate. If we’re serious about getting the rest of the developed world vaccinated (let alone the nations we’ve yet to reach), we need to think carefully about the fate of ‘Novax Djokovic’, the ultimate anti-vax poster boy.

The Australian federal government’s treatment of Djokovic has been – as pointed out by Judge Kelly on Monday morning – intentionally punitive. It is similar to the aggressive approach we’re seeing from other world leaders, with Macron for one declaring he’s going to “piss off” the unvaccinated in France. This rhetoric may be popular, but it’s counterproductive.

This should be of particular concern to marketers. As experts in communication and persuasion, we should be advocating another way. We are the architects of previous impressive behavioral change campaigns, with nudge tactics and breakthrough insight, that have successfully helped many other societal health problems. Persuasion tactics so far have achieved a good uptake in what McKinsey call the ‘cautious’ groups, but very little movement in those ‘unlikely’ to get vaccinated. This group, to which Djokovic certainly belongs, is a much tougher nut to crack.

I’ve learned this from recent personal experience. Over Christmas, I spent time with someone who had repeatedly refused their Covid jab. Despite all my energetic efforts, I couldn’t persuade them to change their mind. This frustrated me, so I spent most of my break learning more about the anti-vaxxer argument and how we might go about effecting change.

Persecuting those who don’t want the vaccine underestimates their strength of belief. Oppression just entrenches those beliefs further. Restrictions may work against the vaccine-hesitant but true anti-vaxxers will give up their careers, their freedoms and – in Novak’s case – their dreams to stand by their beliefs. Make a martyr of him and others will be inspired, not quelled.

Society doesn’t just underestimate their beliefs but their intelligence too. Tony Blair recently called anyone who was unjabbed an “idiot“. This is unhelpful. It’s also not true. Novak Djokovic, for example, is not an idiot: he speaks five languages, has travelled the world and talks to the media better than most politicians.

This blind spot to anti-vaxxers means it’s easy to disregard them and that’s a mistake because, actually, in many ways they are the better communicators. Read the Centre for Countering Digital Hate’s report on the Anti-Vax Playbook and you’ll see their messaging is clever, consistent and compelling.

Conversely, the pro-vax argument dances to their tune, spending energy mocking their views as ’mumbo jumbo’. The more it does so, the more airtime and ammunition it gives to those arguments and the more questions that creates among the vaccine-hesitant. In a digital world, arguing with an anti-vaxxer is like sinking in quicksand – the more you squirm the worse it gets. As Reagan warned, “if you’re explaining, you’re losing”.

We’re often slow to realize that some people are genuinely scared by the vaccine. It’s easy to confuse rational arguments with emotions. Journalist Myke Bartlett put it perfectly when he said: “You can tell your children there isn’t a monster under the bed, but you can’t stop them feeling like there is.” If someone has an emotional fear of doing something, it’s almost impossible to win that argument with rational facts alone.

Society also often shows a surprising lack of empathy with anti-vaxxers. Australian PM Scott Morrison says “rules are rules” and that, to be fair, everyone has to be treated the same. Except of course treating everyone the same isn’t fair. For most people, taking a vaccine is inconsequential. For Djokovic – and others like him – it’s not. He hasn’t risked his career and reputation lightly. We rarely consider that this isn’t actually the same for all of us.

So what should we do? I’m not advocating that Djokovic gets a free pass, but how we treat him should be the blueprint to how we treat all those who are yet to be vaccinated.

Firstly, we need to listen and ask questions. It’s true in the case of Djokovic that he has been secretive about this, but arguably only because when he has spoken he has received such a backlash. Anti-vaxxers are often grouped together as a single entity, but their reasons are very individualistic. In Djokovic’s case, he has a very specific set of medical beliefs that for the most part serve him incredibly well. Truly being willing to listen to those individual concerns is key if we want to change opinion.

Secondly, we need to be prepared to concede some ground. The pro-vaccine argument has become so absolutist it ironically undermines itself. Admitting that it’s reasonable to be hesitant and that we don’t have all the answers doesn’t weaken the pro-vaxx argument, it strengthens it.

Thirdly, we need to find common ground. We can’t alienate a percentage of our society forever. Making them the enemy doesn’t solve the problem. We need to find a way to work with them. There is one thing that unites us – we all want Covid to be over – so if we start from there we are far more likely to find the solution together.

Finally, we need to give them time and space to change their mind. This is what is perhaps most frustrating about the Djokovic situation. Handled differently, this could have been a healthy and productive debate over time. Instead, we’ve seen an attempted show trial that, in the words of Andy Murray, is “not good for anyone involved”.

I guess we have to accept we will never change some people’s minds, but as practitioners in communication and behavioral change we arguably have more responsibility than most to try. For the swaggering politicians of the day, punishing anti-vaxxers plays well to their voters, but it’s very ineffective at actually changing minds. There are no easy answers. It takes time and patience, but we could start with Mr Djokovic.