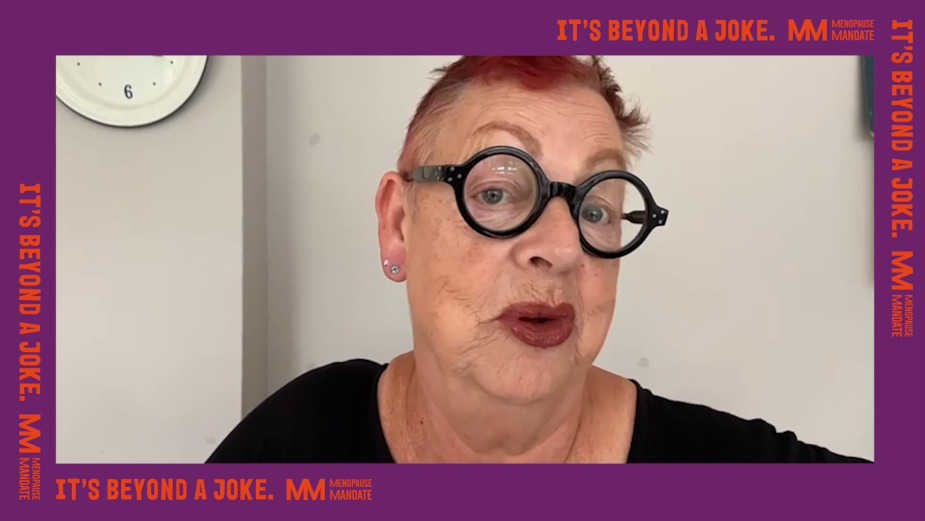 The lack of education and support for menopausal women is beyond a joke so, Jo Brand, Davina McCall, Lisa Snowdon, Gina Bellman, Lavina Mehta, Jackie Adedeji, Mariella Frostrup and TikTok sensation Hayley Morris – and even Rod Stewart – all lent their comic genius by telling menopause ‘jokes.’ The joke being that they aren’t actually joking.

LBB> What was the inspiration behind the work?

Hannah and Lara> What first inspired us was the fact that we knew nothing about it. Education for everyone about menopause, let alone our age group, was non-existent. So when we started researching and discovered how horrendous the situation was, it made us more and more angry.

We got the overwhelming message that the treatment of menopause is so bad that it’s laughable. It feels like one big joke that something every woman goes through is ignored. So we landed on ‘It’s beyond a joke’ for the campaign.

LBB> What were the challenges of the campaign?

Hannah and Lara> A big challenge was treading the fine line between creating these hard hitting jokes, and not just taking the mick. The point of the jokes was to give the sense that it’s an ‘if you don’t laugh you’ll cry situation’, so they needed to have an immediate impact instead of just being funny.

Another challenge was actually writing the jokes. It was a huge team effort and a shared Google Doc page that got us to the shortlist in the end.

We were really eager to do something that felt refreshing for a menopause campaign, so we were conscious of not sugar-coating the situation, or skirting around the facts.

LBB> With Dark Horses having a Menopause Policy in place why do you think other businesses should take note and either apply it to their business or create their own?

Hannah and Lara> Because it should be a given. Every single woman will go through it and it can affect them for a decade or more. Menopause completely flips their whole lives upside down.

It’s like not having a maternity/paternity policy. We shouldn’t have to fight for it, it should have always been there. So companies should see it as their duty to do something about it.

LBB> What impact did the work have on the World Menopause Day rally?

Hannah and Lara> Everyone seemed to really love it! We tried to make the jokes on the placards relatable to as many women as possible, which really paid off in getting all the women engaged with the campaign at the rally.

Some of the merchandise we ended up making, like the fans that read “It’s not even hot out. It’s beyond a joke”, became some of our favourite parts of the rally – in keeping with the comical theme of the campaign but still playing off relatable truths.

LBB> How do you see the work impacting the future of the cause?

Hannah and Lara> We’re hoping this is something that can have real longevity. By saying the treatment of menopause is laughable, it means the platform is somewhere where people don’t have to shy away from stating facts and demanding change.

We want to make sure we keep making noise about the issue and not let the momentum die. The more women who feel heard, and the more men that can become part of the conversation, the more we can get real change to happen.